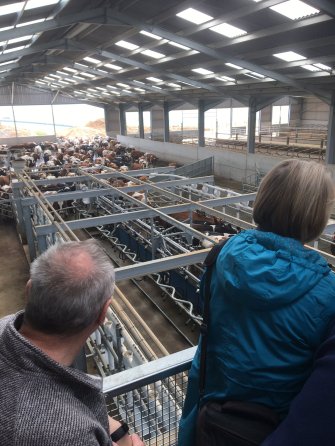 As I write this, there’s snow falling outside my window and that’s two days after we’d turned the milking herd out for the spring grass!  After that lovely early warmer weather in February we thought all our Christmas had come at once! But I was wary and kept thinking winter hasn’t done with us yet!

Now my attentions have turned to building the “Cow Classroom” which has kept me very busy since Christmas with a different set of builders, mostly lads I know from the village.  I’ve been decorating the room myself as asking for help from Harry or Mark isn’t an option whilst there’s still so much to do on the farm.  Although the cows have been extremely comfortable in their new living quarters, there’s still a mountain of jobs for the builders still to do outside the sheds.  The cows maybe inside but now we’ve got to get them out! Finding time to relay concrete sleepers and fencing both sides is the priority now.  Also we’re currently laying a new entrance drive of about 250 mtrs to improve the access for the milk tanker and any other lorries for that matter.  And so the diggers are kept busy most days!

Our matriarch cow Honesty has sadly died and gone to cow heaven after 11 years on our farm.  She went down just before calving to her 9th calf and didn’t recover from the birth.  Her heifer calf also didn’t make it.  However, last years’ bull calf Desmond, was kept for breeding so her line will live on.

I’m still on the road a couple of times a week, travelling to venues giving my “Tales from a Dairy Farmers’ Wife” talk to groups.  I even went off down to Essex last week (2 hour drive each way) to “wow” a U3A group of 130 people.  By the end of my session, they’re all keen to make the journey back to Leicestershire to experience our Farm Tour.  I’ve a dozen or so booked in for this summer so things are looking up but deadlines are creeping closer.  My parents are involved by repairing and making good a second hand “people” trailer bought from the local Ag College, for our Tractor & Trailer rides we’re planning to do for visitors.  Its’ going to look very smart behind the JD tractor as we’re painted it in JD colour scheme.

Our daughter Charlotte has had her first season working and hunting with The Thurlow in Suffolk, which has had to be cut short due to the Equine Flu outbreak in the horse world.  She’s now doing the trade stands at Equestrian shows and events throughout the UK and Ireland for the summer.  Although she hunted my little Connie Norman all season, he’s now come back home for me to “hack about & play with” for the summer – when I get a minute or two!  He’s turning into a little super star on the Hunting field, having hunted with four packs (Cottesmore, Quorn, Fernie & Thurlow) this season alone!  She loves him for hunting as he can do anything.  He’s even had a go as a second Whip, lead a hound from horseback back to the pack, jump any number of hairy and scary ditches and he hasn’t lost the art of opening and closing a gate too!  We both love him to bits!  But even though we’ve built a brand new farm, there’s still nowhere to put a stable for Norman, so I’m borrowed one next door to my house for a while – until I can plan my “space” for him!

In January, Harry and I travelled to Cork in Ireland to attend the “Positive Farmers Conference” where about 400 Irish & British dairy farmers gather for two days in a nice hotel, sharing information, real life stories and future planning about the grazing system!  Amazingly, this conference was celebrating its 20th year!  We even bumped into a friendly face,  J  ames Waterhouse.  It was very interesting to note that the Irish dairy farmers didn’t have a clue how to respond to the ‘Veganary’ campaign in which the Brits were subjected to during January.  I guess the Irish public haven’t heard of Vegans yet!

Harry’s really involved in Oakham YFC and is currently the Club chairman.   He takes his YFC very seriously ie: Holidays!  He’s already been away for a weeks’ skiing with National YFC and he’s just had a weekend in Cleethorpes in March, dressed in an Hawiian shirt!  (We don’t ask any questions!)

It sure is a topsy-turvy world sometimes!

Where to Find Us

“The visit was entertaining, educational and enjoyable and we all learnt a lot.”  John  (Long Bennington Local History Group)

“Thank you for a wonder afternoon.  Extremely interesting and informative.” – Gillian (Thrapston U3A)

“The only complaint I have is the weather wasn’t up to scratch – but it didn’t deter us from having a wonderful trip.  Thank you for your hospitality” – Linda.

“Thank you so much for your hospitality.  It has been a brilliant afternoon.  I will never look at a bottle of milk again without thinking about what we have seen at Farmer Barnes’ Dairy” –  Iris.

“Thank you for a fantastic afternoon, very interesting as we have never been to a farm and seen first hand what goes on.”  – Margaret

“We enjoyed it so much, please let me know if the Family Day Trips are planned for October and I’ll love to bring my Grandchildren” –  S. Pringle.